Most insects are harmless to your lawn. Many are beneficial to the overall health of your soil and in turn the health of your lawn. However, some insects, if left untreated, can damage your lawn often in a short period of time. This is why each time your lawn is serviced we check for damaging insects. Corrective or preventative measures will be taken if necessary.

Several insects that are particularly damaging are:

SOD WEBWORMS – are small brown caterpillars which develop into dull gray moths. The moths fly over the grass in early evening dropping eggs. Watch for damage 10-14 days after observing the moths. Sod webworms feed only at night. Damaged grass blades appear notched on sides. Early August is typically when we see the heaviest damage, although damage may occur as early as June. A heavy infestation can destroy a lawn in only a few days. 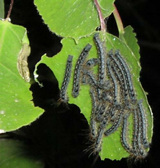 ARMY WORMS – the larval form of moths feed on turf grasses. Early warning signs include low-flying mature moths. Army worms generally don’t over winter, but several generations occur each season. If conditions are right, they can reach high populations in lawns and cause severe damage. You can actually see ragged edges on the grass where the army worms have been feeding. In severe cases, these caterpillars can eat the grass to the ground, leaving large bare areas.

GRUBS – these turf destroying grubs are plump, c-shape insects. They are whitish with dark areas near the rear and a distinct brown head. The adults are beetles (Japanese, May or June beetles). Adult female beetles lay their eggs in the soil. The eggs hatch and the grubs spend most of their life as grubs beneath the soil feeding grass roots. Most grubs have rather long life cycles lasting several months to years. Grub feeding destroys the roots leaving the tops to wither and die. In heavy infestations, pruned off to the extent that turf can be rolled back like a carpet.

SPITTLEBUGS – adults are about 3/8 inch long, dark brown or black and have two orange stripes across the wings. Orange colored eggs are deposited in bits of hollow stems and other debris. Nymphs, ivory colored with a brown head, hatch in about two weeks and begin to feed immediately by sucking juices from the grass. They cover themselves with a frothy mass known as “spittle”. There may be one or several nymphs in each spittle mass. The masses are found from just below the soil surface to a few inches above it. A heavily infested area will feel squishy when you walk across it due to numerous spittle masses. 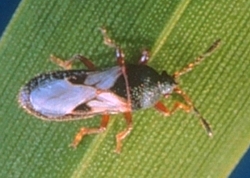 CHINCH BUGS – are most damaging to St. Augustine grass. But, you may see them on grasses such as zoysia, Bermuda and centipede. The chinch bug inserts its slender beak into the grass and sucks the plant juices. As the chinch bug sucks the plant juices, it releases a toxin that causes yellowish to brownish patches in turf. Typical injury appears as spreading patches of brown, dead grass. This pest is a sun loving insect and seldom attacks grass in dense shady areas.

BILLBUGS- Billbug damage usually appears in late-June through August, when summer drought stress is common. Light infestations in lawns often produce small dead spots that look like the turf disease, dollar spot. Sometimes the damage looks like irregular mottling or browning in the turf. Heavy infestations can result in complete destruction of the turf, usually by August. Billbug damaged turf turns a whitish-straw color and the stems are hollowed out orfull of packed sawdust-like material.